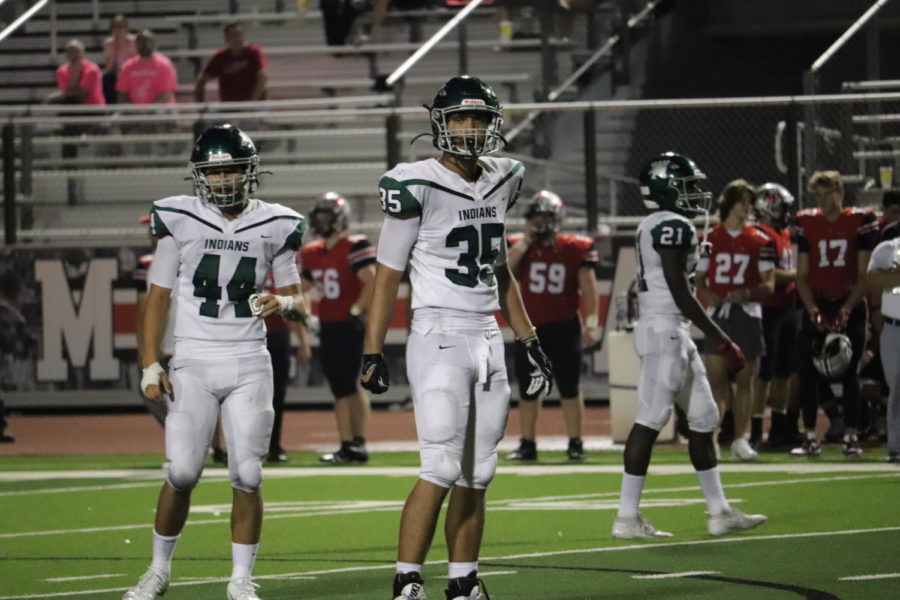 Defensive end Donovan Maynard (35) on the field during the Indians' game against Marcus.

At 6’5″, Donovan Maynard is hard not to notice, whether it’s on the football field or in the hallway. The senior defensive end is in his second year on varsity.

“I’ve played football for 13 years,” Maynard said. “My goals for this year are to make playoffs and become an all-district player.”

Maynard is driven by a strong work ethic.

“I put in the work that nobody else wants to put in because I know that it will go a long way in life,” he said.

Maynard gets a lot of his motivation and inspiration from his family and teammates.

“We just have the heart to be the best we can be,” he said. “We were counted out last year and we don’t want to be looked over this year.”

Maynard has high hopes for the defensive unit this season. They practice after school Monday through Thursday and have weight workouts Monday and Tuesday morning. The work continues with workouts and film on Saturday morning.

“I expect the defense to step up and become a big part of our football team. I want teams to be afraid of our defense when we play them.”

Over his high school football career, Maynard has made several memories and plans to continue playing in college.

“My favorite memory of WHS football was playing in the playoff game at The Star in Frisco,” he said. “I plan on going to UIW for football.”